GOOD FOR ANOTHER TEN!

After a long and sometimes dusty 2019 operating season, the forty-six animals on the Kit Carson County Carousel were recently carefully “washed” by the Burlington FFA students. FFA Sponsor, Gaston Hornung, stated that one of the many objectives of the FFA Program is community service. The Kit Carson County Carousel Association was absolutely delighted when the students asked if there was something that needed to be done! Each season the animals must be gently washed (and thoroughly dried) to remove dirt, fly specks, body oil, and residue from sticky little fingers. This process is critical to protecting the original paint that has been on the figures since 1905. Though there has been occasional need to repaint small portions of some animals, it is estimated that over 90% of the paint on the Lion and his forty-five wooden friends is original.

This year, the cleaning was even more important and critically necessary as it was needed in preparation for completing the re-varnishing of the animals.   During the later part of 2018 , the four chariots and the outside and middle-row animals were each given a new coat of protective varnish. Two weeks ago, the inside row of  smaller figures received the same treatment. Overseeing a carousel with 90% original paint on its animals and scenery panels is a responsibility that the Kit Carson County Carousel Association takes very seriously. Though the carousel is run only on the hour and half hour between Memorial Day and Labor Day, thousands of riders annually slowly take their toll on the 115- year old Merry-Go-Round. Though a polyurethane top coat could assist in preventing some of the nicks and scratches, eventually that top coat would need to be removed and along with it would come the original paint! Thus, the Carousel Association used only old -fashioned varnish.

After the animals are thoroughly clean, a week is allowed for the figures to continue to dry. Then the carousel’s restorers Rand and Karen Hood touch up any damaged areas of paint with artist’s oil paints and then return to their Colorado studio some 200 miles away. After waiting another seven to ten days, the varnishing process can begin. The Hoods mix an overall protective coating mix from Restoration Varnish mixed with turpentine…this varnish is often referred to as “water white” as its chemical components do not yellow over time the way common varnishes do. Properly mixed and applied, Restoration Varnish will meld together leaving no brushstrokes and will not sag or run during curing. Timing of the varnishing is often a challenge as each newly varnished animal needs to cure for at least another ten days (and the nighttime temperature should not be below 60 degrees) before it can be ridden.  Though the paint touch ups and filling of any chips are done annually, the varnish can last around 10 years in a protected environment.

The Hoods were mentored by Will Morton, the original artist that restored the paintings and animals in the late 1970’s and early 1980’s. Morton died in 2017 but Rand and Karen have skillfully taken on the responsibility of maintaining the Kit Carson County Carousel as the most significant antique wooden carousel left in America.  The animals now clean and shiny are indeed good for another ten! 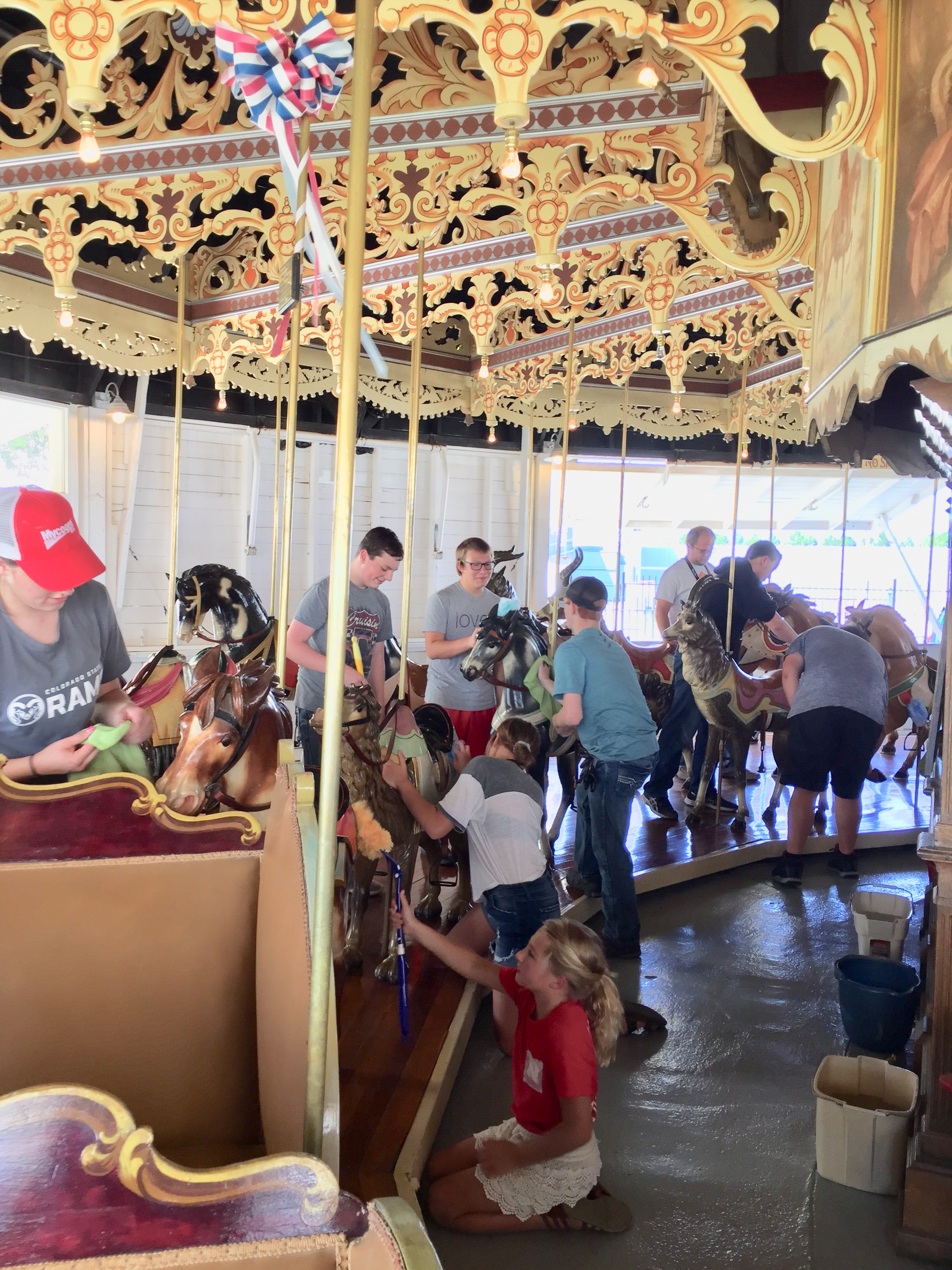