One of a Kind

The Auchy Friction Clutch was developed by Henry B. Auchy as an effective and foolproof means of powering a carousel.  Henry B. Auchy and Chester E. Albright partnered in 1904 to form the Philadelphia Toboggan Company, which soon became a leader in the carousel manufacturing industry.  In 1908 Auchy applied to the U.S. Patent Office for a patent on the carousel drive mechanism that he had invented.  The patent, no. 937750, titled “Power Mechanism for Carousels,” was granted October 26, 1909.

The full text of the patent can be seen here: https://patents.google.com/patent/US937750A/en

The Auchy Clutch provided a means whereby a carousel operator, old or young and with a minimum of training, could safely start and stop a carousel without risk to the carousel, or to its frame, gears, and most importantly, its riders, all of this in an age when modern automotive hydraulics were unknown. 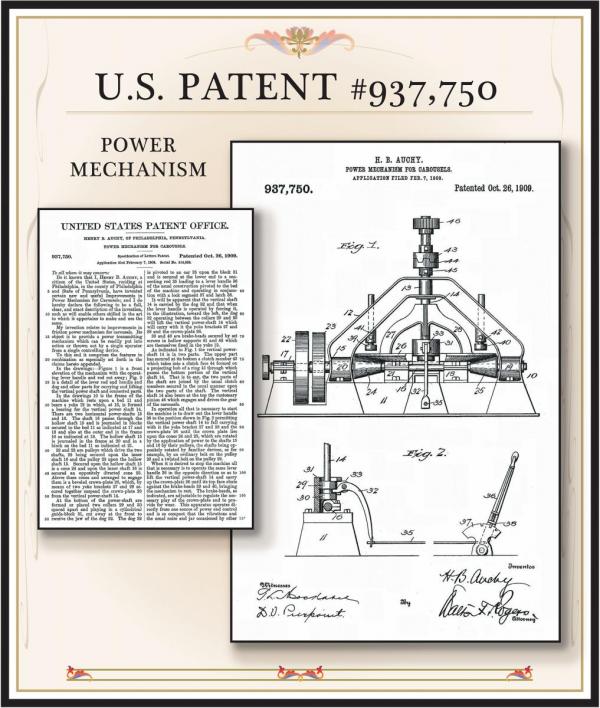 Figure 1 is from the Auchy patent and shows the mechanics of the Auchy clutch.  The clutch sits on the floor of the carousel building directly below the carousel's drive ring (labeled "drive gear" in figure 2), with a long vertical shaft extending upward from it and ending in a pinion gear that meshes with the carousel drive ring.  The heart of the clutch is the large steel disc, shown in figure 1 as "26". 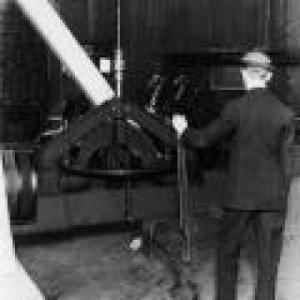 In the upper corner of this exhibit is an old Auchy Clutch stock photo which shows how the clutch will operate, but it lacks the connection of the clutch's pinion gear with any carousel drive ring.   However, it does, like figure 1, clearly show how the steel disc "26" rests upon two drive cones (labeled "24" and "25" in figure 1) providing the motive power which the pinion gear transfers to the carousel via the carousel's drive gear.  Those two cones are made of horsehide and last virtually forever, needing but an occasional sandpapering if they become glazed from use and begin to lose their grip on the steel disc they power.

In order to rotate the steel disc, the two horsehide cones must revolve in opposite directions, being on opposite edges of the steel disc. In figure 1 there are two drive shafts for the two cones, one concentric inside the other and both exiting to the left in figure 1 on two wheels, labeled "22" and "23," which are turned in opposite directions by wide leather horsehide belts.  This photo is of the belt drive in use today on the Kit Carson County Carousel and it shows the belt twist necessary to have just one motor, driving the two belts. The twist forces the belts to run in opposite directions when they turn the two horsehide cones of the Auchy Clutch, one clockwise and the other counter-clockwise.

Figure 1 and the stock photo both show the lever which the carousel operator uses to raise and lower the steel disc to stop or start the carousel.  There is only about one inch of play between START, where the steel disc rests solidly on the horsehide cones and the carousel starts turning, and STOP, where the upper side of the steel disc, is pressed against metal-housed wooden braking discs bringing the carousel to a smooth and gradual stop.  Research by Matthew Caulfield, Seabreeze Park (Rochester, NY) Archivist