Of the nearly 2,500 wooden carousels carved in America between 1885 and the 1930s, fewer than 150 are still in existence. One of the finest survivors, however, can be found on the county fairgrounds in Burlington, Colorado.

The sixth of 74 carousels manufactured by the Philadelphia Toboggan Company (PTC) between 1904 and 1933, the Kit Carson County Carousel is a three-row, stationary (the animals do not move up and down) machine housed in a 12-sided frame building. It is the only antique carousel in America still having original paint on both the scenery panels and on the animals, and PTC#6 is the only surviving menagerie (having other animals in addition to horses) carousel made by PTC. And it's fully operational!

​For a full list of the remaining carousels, visit the National Carousel Association.

One of a Kind

The Auchy Friction Clutch was developed by Henry B. Auchy as an effective and foolproof means of powering a carousel.  Henry B. Auchy and Chester E. Albright partnered in 1904 to form the Philadelphia Toboggan Company, which soon became a leader in the carousel manufacturing industry.  In 1908 Auchy applied to the U.S. Patent Office for a patent on the carousel drive mechanism that he had invented.  The patent, no. 937750, titled “Power Mechanism for Carousels,” was granted October 26, 1909.

The 144 page full-color “coffee table” book on the carousel is now complete and available for sale. These often forgotten images combine to depict the nation’s most famous antique carousel in all its glory. Includes US shipping and handling. Cannot ship internationally. 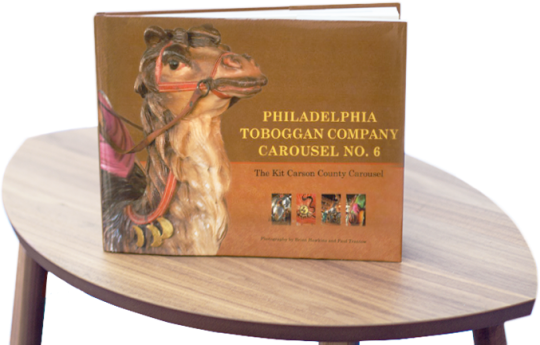